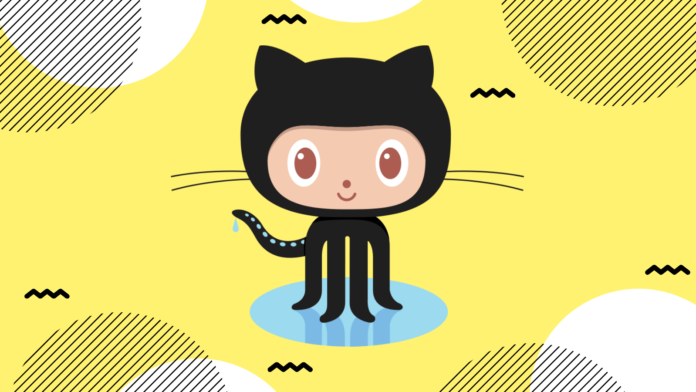 By its sheer size and number of active projects, Github showcases its power and popularity. Today, Github is a one-stop solution for hosting software projects. However, 2018 arguably brought in the biggest change in the history of platform’s operational policies. Github was officially acquired by Microsoft. It’s speculated that Microsoft would integrate its future mobile development with Github. Since the platform is an opensource marketplace, many developers were turned down by the idea of its acquisition by a for-profit brand. Condition are bound to change, as is always the case with such acquisitions. It’s time we hunt for some Github alternatives for our open source projects.

We have compiled a list of hosting platforms that are most suited to the developmental trend of the current time. Here is our comprehensive list of 10 best Github alternatives. 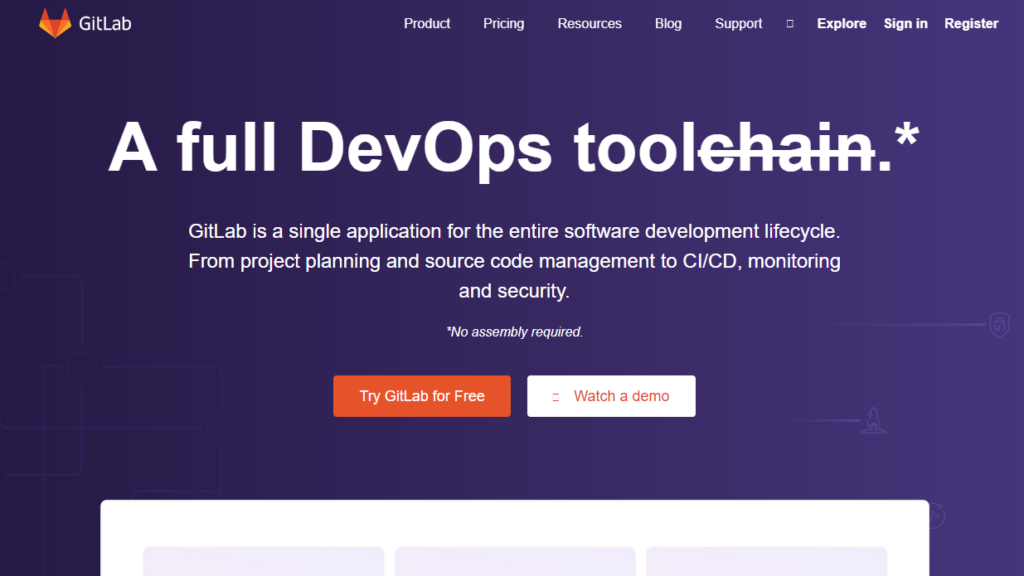 GitLab is a feature-packed platform. It is powerful, secure and efficient, in all the possible sense of the words. It is promoted as a single application for your entire developmental lifecycle. The platform manages all the corners of the development; project planning, source code management, monitoring and also security. If we believe the statistics on its website, the platform makes the lifecycle 200% faster when compared to the other platforms, which by any definition, is a great optimization.

The platform enables teams to collaborate with each other and work out of single-thread instructions. It also allows teams to store their data in a single place, so members know simultaneously about the progress. For the given reasons, GitLab deserves the top place in our list of GitHub alternatives. 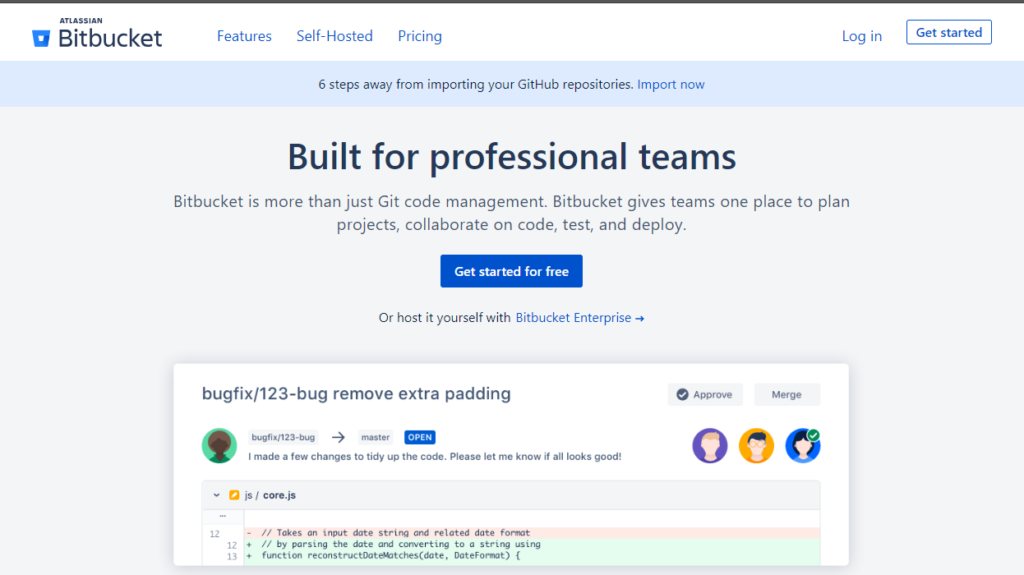 You can use Bitbucket for pretty much anything. It is an incredible Git solution for professionals, which allows teams to collaborate on codes with the help of discussion and inline comments via pull requests. The platform features unlimited private repositories to store, version and collaborate. Bitbucket can be a considered a solid alternative to Github, or even an addition to GitHub, if you are still hungover on its features.

The platform has a user-friendly interface, which also allows large files, unlike GitHub. Its other advantage over Github is that it allows private code repositories in the free model, which is super helpful. Bitbucket is a well-rounded GitHub alternative that excellently performs and consistently expands its code hosting platforms. Highly recommended. 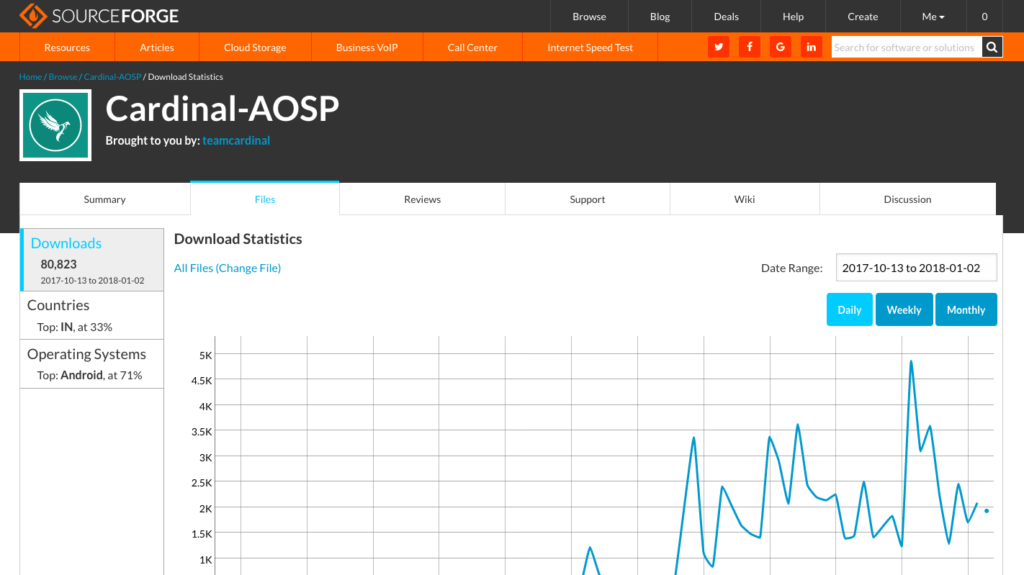 SourceForge is a web-based repository for source code which acts as a centralized location for software development. The platform allows developers to manage and control open-source software development. At the time of writing this article, as per its website, the platform is hosting more than 300,000 projects. The platform also flaunts its 3.4 million registered user base. But we suspect that most of them wouldn’t be active.

Its support for CVS, SVN, Git, Bazaar and other repositories make it an excellent Github alternative. Since it is a web-based platform, it doesn’t have applications for any of the Operating Systems. But you can access the platform from almost anything that has a web browser. 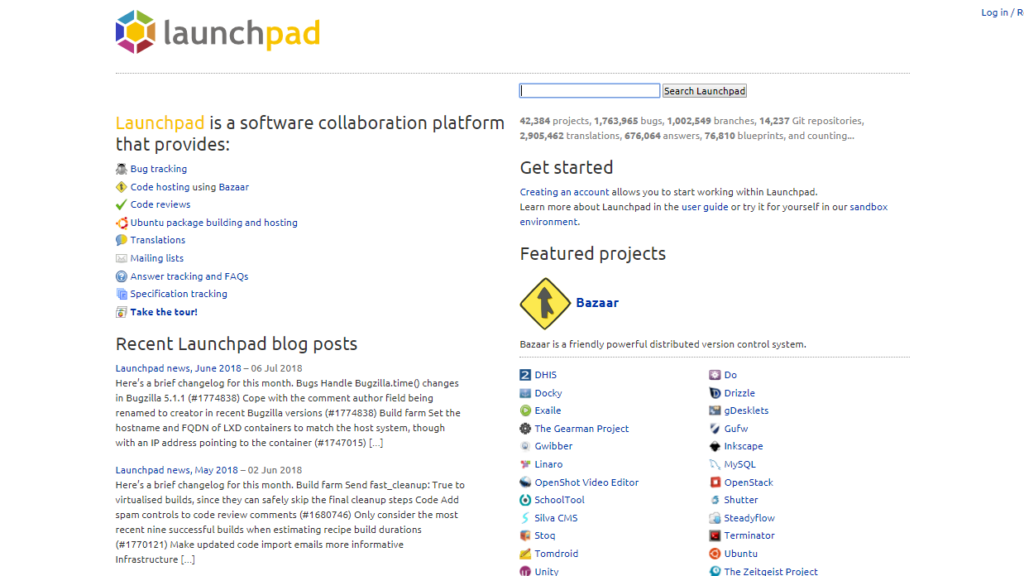 Launchpad is an open source code-hosting platform based on collaboration and Bazaar. The platform features a wide range of developmental attributes; code hosting, code reviews, mailing lists, bug tracking and more. This Github alternative has comparable project management tools which simplify teamwork. It allows team members to track their projects and stay updated with their project development. Launchpad also allows you to build and host Ubuntu packages.

The platform allows free hosting for public projects. However, if you want to host code branches for private teams and take advantage of the other features, the platform would require a subscription. The pricing starts from $50 for the Bronze pack and goes up to $260 for the platinum pack. 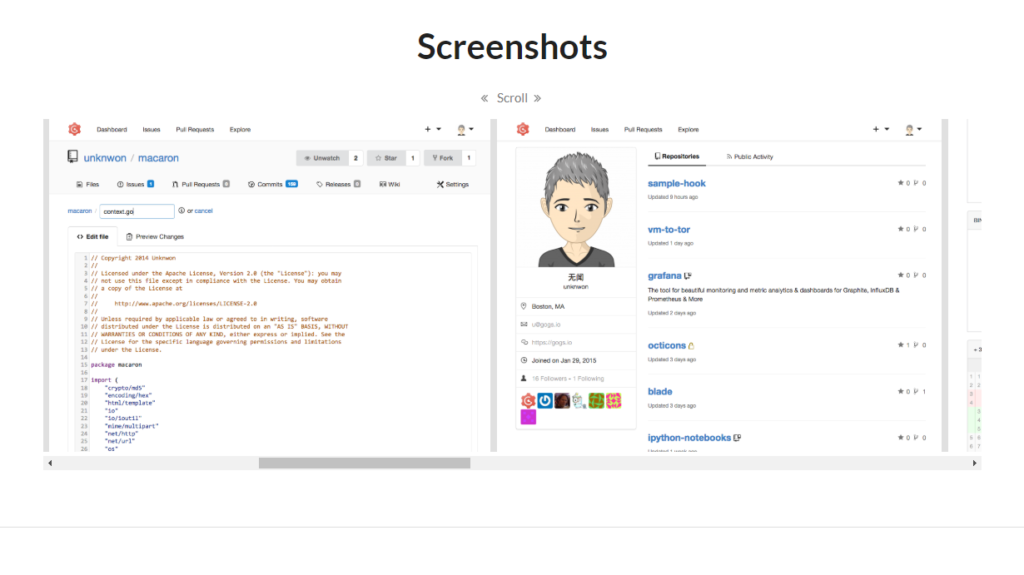 Gogs is an open-source self-hosted Git Service that doesn’t require much of the system resources to function. The method to its setup is pretty elementary, which is further supported by its tiny size, which allows it to run on a Raspberry Pi. The platform accurately describes itself with the phrase – ‘a painless self-hosted Git service.’ The other advantage of this platform is that it runs cross-platform; MacOS, Windows, Linux, ARM—name it.

Gogs is arguably the fastest GitHub alternative through which you can self-host code for your open projects. The platform is hundred percent free of charge and can be used under the MIT License on GitHub. 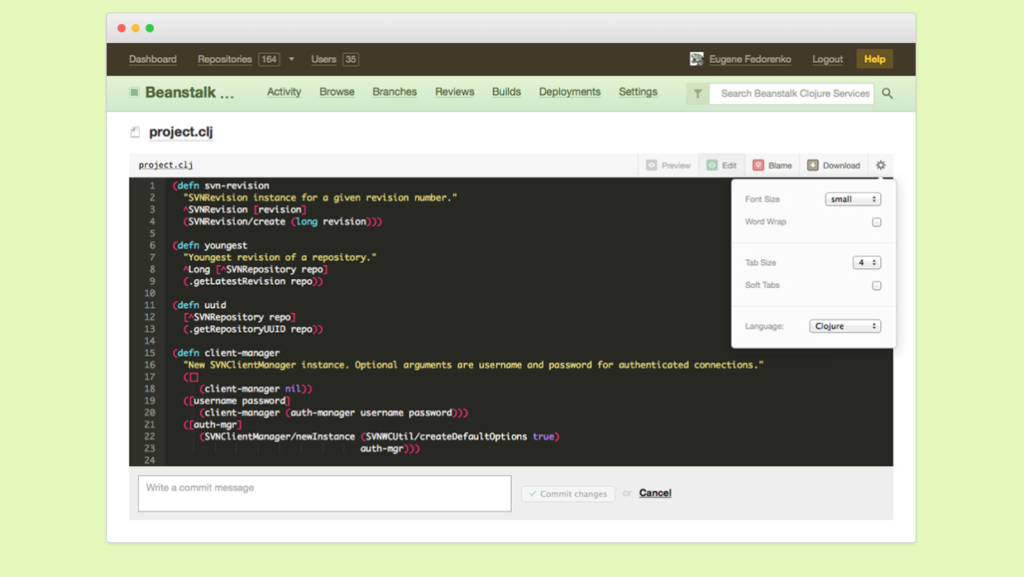 Beanstalk is a reliable platform to manage your source code repositories. It is primarily used for private code hostings. The platform does a decent job at creating a comfortable ecosystem. The platform manages the entire developmental workflow; from writing and reviewing, until the end where the code is deployed. The platform has a rock-solid Git and SVN hosting which allows you to add file and create branches—directly from the browser. Beanstalk is a sold alternative of GitHub, which gives you full control of both individuals and teams by defining responsibilities. This makes the platform flexible and easy to organize. 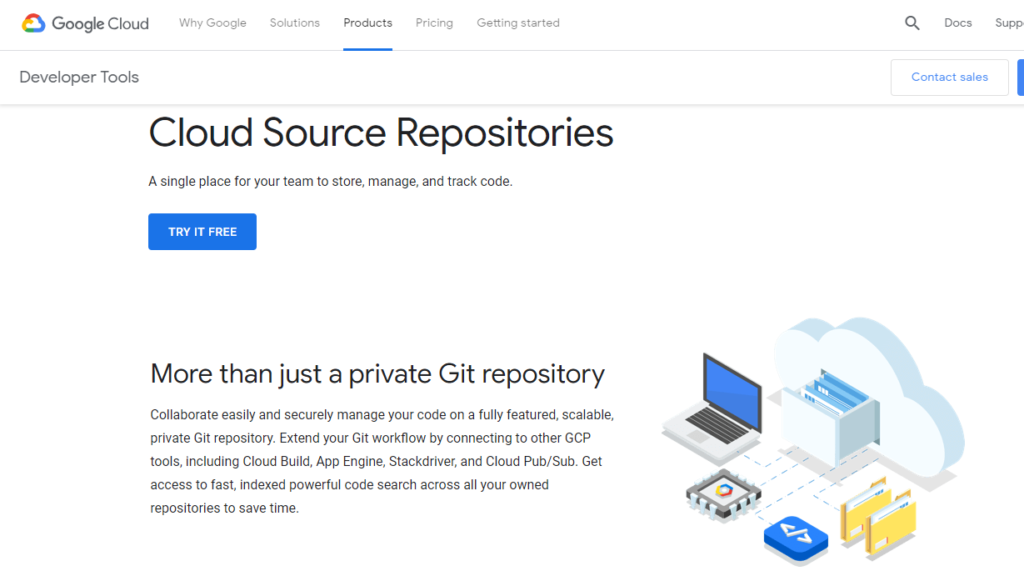 Cloud Source is a platform for hosting private Git repositories. It’s a single place where you and your team can store, manage and track code. You should not consider this platform as just a private Git repository. It allows users to collaborate and manage their codes on a scalable Repository. You can also extend your Git workflow by integrating it with other GCP tools; App Engine, trackdriver and more. This GitHub alternative by Google also features a powerful code search that works across your repositories.

Cloud Source Repositories allows you to seamlessly connect your Private Rep. to your Repositories on Bitbucket or Github. Since the platform is backed by Google’s infrastructure with high availability, it is super reliable. 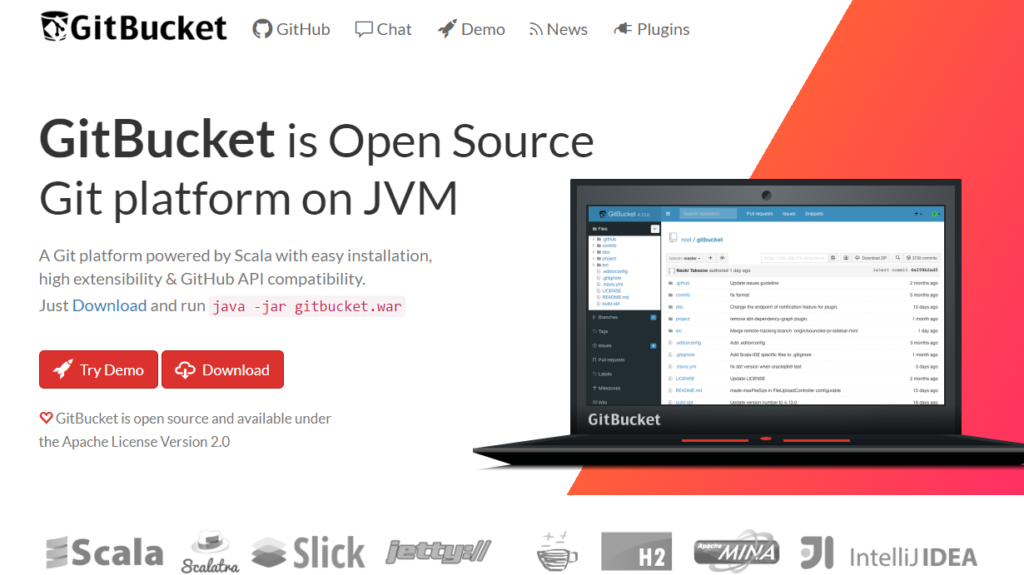 GitBucket is a highly pluggable Github alternative that runs on Java Virtual Machine(JVM). The platform is feature-packed and has developmental attributes like repository viewer, pull requests, issue tracker, wiki and documentation. It also features a plugin system that further extends its core attributes. GitBucket is powered by Scala, which supports easy installation and high extensibility. The platform is also compatible with a wide range of GitHub API.

The platform has recently launched its version that has upgraded all aspects of the developmental tool. This has made the platform more relevant and current. You can download its Demo for free, which is available under Apache License. 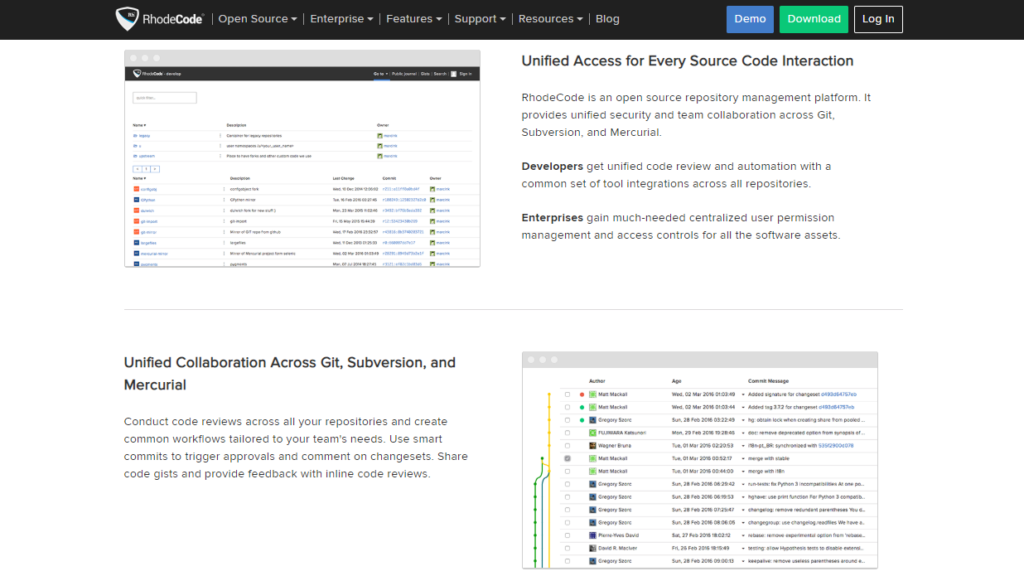 Powered by Slant community, RhodeCode is a highly secured management tool for GIT with a built-in push and pull server. This free open source GitHub alternative features full-text search and code review. It also has a built-in authentication system that has the capability to authenticate via ActiveDirectory and LDAP. In addition to that, RhodeCode smoothly handles integrations with existing external systems.

RhodeCode functions are pretty similar to GitHub and BitBucket. That doesn’t mean it can’t run as a stand-alone hosted application on its own server. The platform is consistently getting better by adding more and more customized self-administering tools. If you are looking for a comfortable switch, then this is the one. Note it. 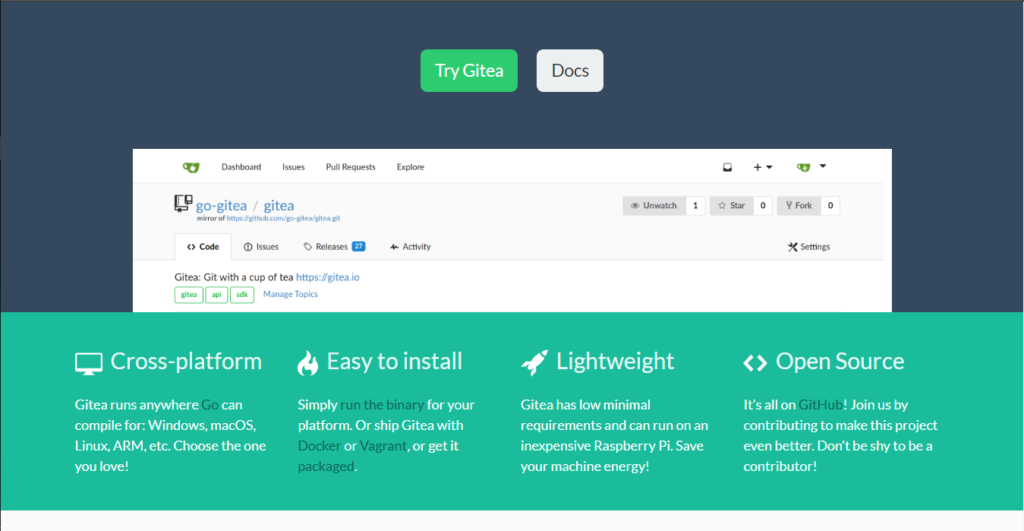 Gitea is a lightweight code hosting solution published under the MIT license. The platform is a community managed forks by Gogs, which can run on almost any major platform. Since the platform is written on the Go, it is super-easy to install. Or just simply run the binary on this platform. Gitea runs on Raspberry, which ensures you save plenty of machine energy. Gitea has minimal requirements and is relatively stable for its size.

The platform runs on an Open Source model, and developer contributes to making this project better with every new update. Gitea, as per our tests, is a painless self-hosted Github alternative. You can’t go wrong with this pick.

These were our top picks of GitHub alternatives on which you can host your next project. We have also briefly introduced the alternatives to help you make a fair judgment. This list will help you find an apt hosting service for hosting both your public and private repositories.

We are open to suggestions. If you disagree with our list or have a suggestion that we have missed—perhaps one of your favorite hosting platforms, let us know in the comments. Also, to get instant tech updates, follow TechNadu’s Facebook page, and Twitter handle.

Can You Really Get Free WordPress Hosting?

What Are ‘Google Penalties,’ and Why Do You Need to Avoid Them?

Easy ways to build a website for new entrepreneurs