The 188 IPOs that have taken place in 2018 raised more than $45 billion, more than 20% more than at this time last year according to data from Renaissance Capital. And they included billion-dollar tech names such as Dropbox (DBX) , Eventbrite (EB) and DocuSign (DOCU) .

In 2019, even larger IPOs are on the horizon, with giant companies like Uber, Lyft and Palantir preparing to go public provided that the markets hold up. Late last week, Lyft announced it had filed confidentially to go public and Uber reportedly did the same the very next day, with both firms reportedly racing to debut in the first quarter of 2019.

While heart-stopping valuations like Uber’s may get investors’ attention, they can also mean high expectations and heightened pressure to increase shareholder value, according to Alex Castelli managing partner at CohnReznick LLP.

“If a company is valued that high, an investor is going to want to see this become a one trillion-dollar company,” Castelli told TheStreet.

Other than Uber and Lyft, there are a slew of other highly-valued tech names preparing to make the jump next year. Here are the 8 most highly-anticipated tech IPOs for 2019, listed in order of their latest valuations:

At a recent private valuation of $120 billion, according to a recent report, an Uber IPO at that level would be the biggest public offering ever. CEO Dara Khosrowshahi has said many times that he intends to take the company public in 2019, provided that market conditions hold up, and the company hired CFO Nelson Chai in August to help get them there. In preparation for the public offering, Uber has been publishing financial statements for several quarters that show increasing revenue but substantial losses for the ride-share giant.

Long one of the most highly-valued U.S. tech “unicorns,” the secretive data mining and analytics firm Palantir isn’t discussed as frequently as ride-hailing giant Uber — but it, too, is valued in the tens of billions of dollars. According to an October Wall Street Journal report, the firm was in discussions with Credit Suisse (CS) and Morgan Stanley (MS) for a potential 2019 IPO, which could value the firm as high as $41 billion and happen in the back half of next year.

Uber’s smaller nemesis is also racing towards a 2019 IPO, and may be trying to beat its competitor to the punch. Lyft was valued at $15.1 billion in June, when it raised $600 million. The company signed on JPMorgan (JPM)  to lead the offering. Unlike its larger ride-hailing counterpart, Lyft operates only in the U.S., but both firms are striving to re-frame themselves as transportation and mobility companies with assets beyond just ride-hailing, including e-scooter and bike-sharing businesses. 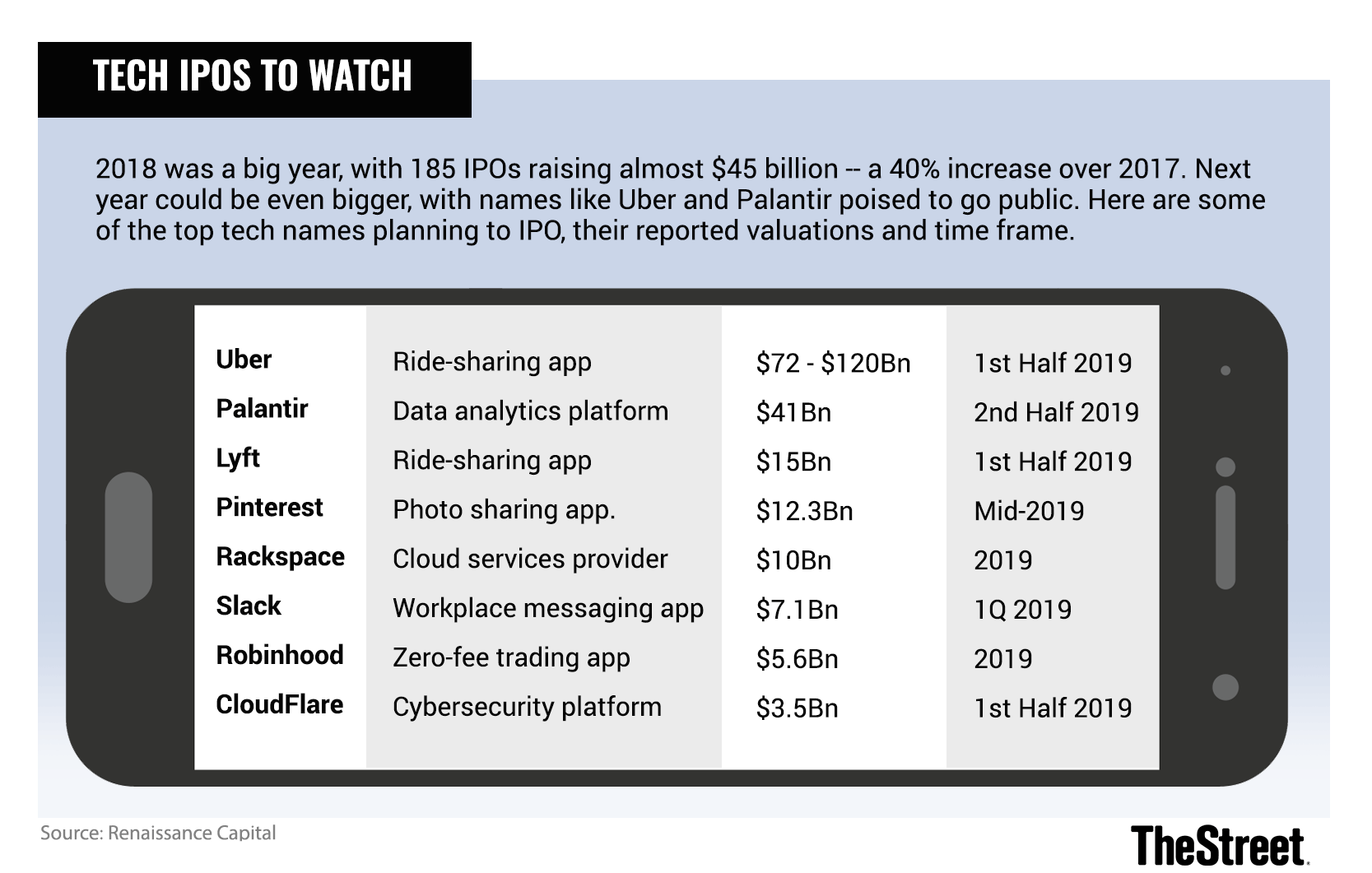 Despite its ubiquity as an image-sharing app, Pinterest mostly flew under the radar as an IPO candidate until this year when it reportedly doubled its ad revenue. Its ad revenue for this year was projected to hit $1 billion in July, according to CNBC, nearly twice the previous year’s number. Pinterest was privately valued at $12.3 billion during its last round of financing in 2017.

If the name sounds familiar, it’s because 20-year-old Rackspace, which specializes in cloud computing services, was a public company until 2016, when the private equity firm Apollo Global Management took the firm private in a deal worth $4.3 billion. Now, Apollo may be considering a fresh IPO of Rackspace according to a May Bloomberg report, which quoted a valuation of $10 billion and a potential target date of sometime in 2019.

The workplace messaging darling may finally be ready for its close-up. Slack’s run as a popular workplace communication tool has meant that it’s fended off acquisition talks over the years from suitors such as Microsoft (MSFT) and Salesforce (CRM) , with CEO Stewart Butterfield saying that he intends to take the company public and appointing Slack’s first-ever CFO in February. The company is said to a planning an early 2019 IPO at a $7 billion valuation.

Robinhood has evolved into a brokerage for the mobile-first generation. Unlike traditional brokerages that earn money on commissions, Robinhood earns revenue from interest and cash on its accounts, as well as from premium subscriptions, and offers crypto trading as well as equities. Its latest round of financing in May valued the company at $5.6 billion, and CEO Baiju Bhatt confirmed the company’s IPO plans in September.

CloudFlare, which sells performance and security services for websites, is a well-established name in web hosting and cybersecurity that could go public in 2019. The company is aiming to turn its ubiquity — it serves about 10 million web domains, according to its website — into a successful public offering. According to Reuters, Cloudflare is seeking an IPO in the first half of next year that could value it at $3.5 billion, a transaction that will be led by Goldman Sachs.

JPMorgan, Microsoft and Salesforce are holdings in Jim Cramer’s Action Alerts PLUS member club. Want to be alerted before Jim Cramer buys or sells the stock? Learn more now.

Can You Really Get Free WordPress Hosting?

What Are ‘Google Penalties,’ and Why Do You Need to Avoid Them?

ABOUT US
YourOwnWebsite.net is your no. 1 news website regarding everything you need for building and maintaining your own website. We provide you with the latest trends, news and videos straight from the industry.
Contact us: info@yourownwebsite.net
© Copyright 2021 - YourOwnWebsite.net - All rights reserved
MORE STORIES